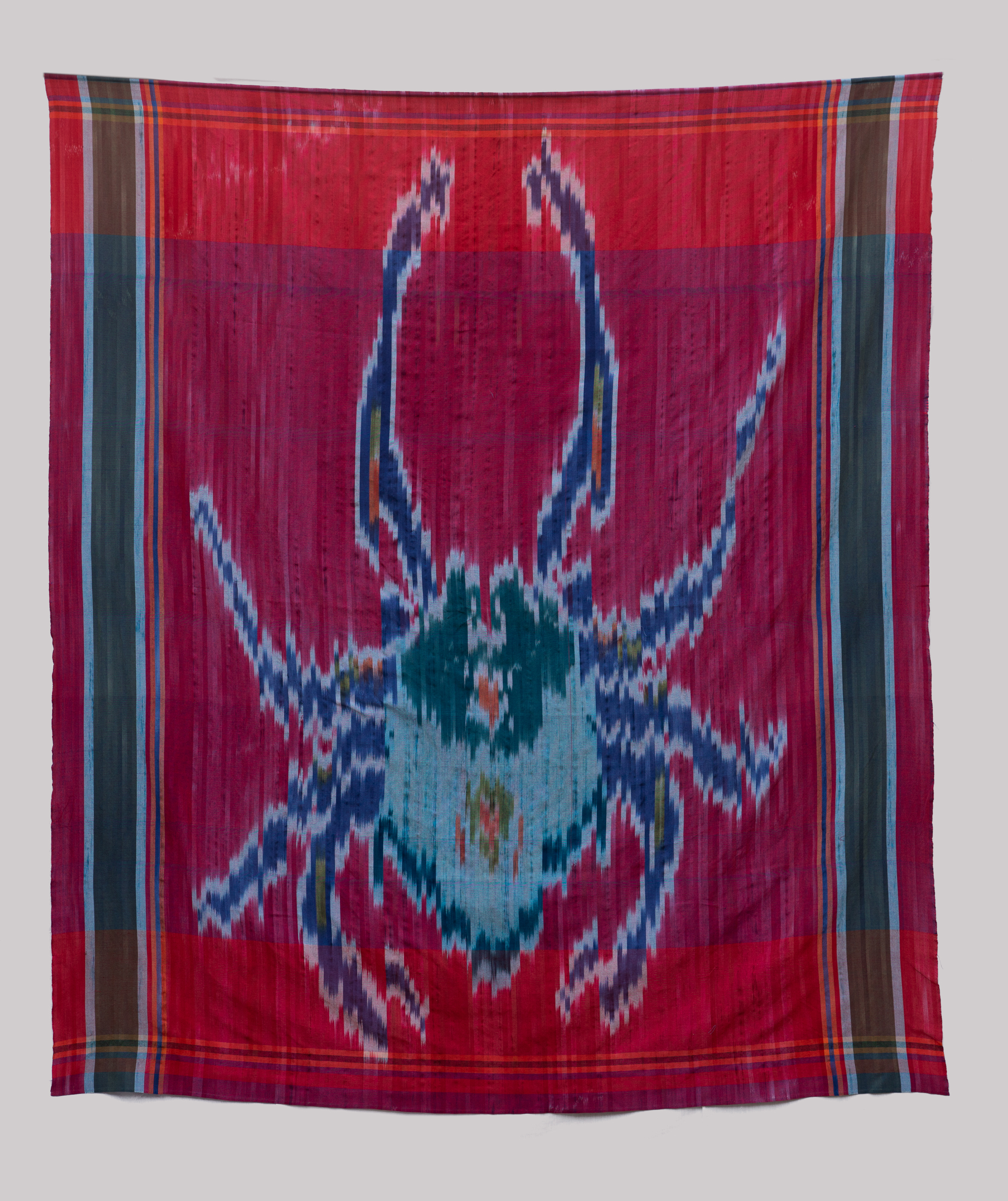 Hamnzianpour & Kia is pleased to present Behind the Curtain (Passé-Pardé) by Negar Farajiani, marking the artist’s third solo exhibition in the United States. On view are works rooted in Farajiani’s longstanding interest in Iran’s textile traditions—Tattered Masterpieces (2016–2021), Triptych (2020), and Red Webber (2022). In Farajiani’s latest work, the artist meditates on the meaning of curtains in Iranian society, as such objects figure prominently in domestic life, often delineating the social and private quarters of a house. Tattered Masterpieces, for instance, features the rich variety of regional fabrics for which Iran holds itself in great esteem and which are often found in Persian homes. In Iran’s history, curtains also have a public significance by holding a time-honored place in Naqqāli, a form of street theater, which uses them as narrative aids in the form of painted tableaux that accompany a storyteller. The curtain, then, as both technology and symbol, strongly signifies the division between the domestic and the public sphere in Iran.

The exhibition’s interests in the private/public division should not come as a surprise for an artist like Farajiani, who counts herself as one of the country’s very few social practice artists. For years, the artist has enlisted public participation to launch a number of long-term projects that focus on social and environmental connections, such as Made in China (2010–2019) and Tehran Monoxide (2011–2021)—the former, an international, public beach ball game of sorts that dealt with the politics of global supply chains and the latter a participatory research project that brought schoolchildren together to consider the consequences of urban pollution on exurban regions. In a similar vein, Triptych dwells on local and international connections, particularly the worldwide experience of the Covid-19 lockdowns within the Iranian diaspora. In this piece, Farajiani along with curators Anahita Rezaallah and Elnaz Tehrani brought together collaborators from eight countries to design and create a series of curtains to record the experience of quarantine.

The artist’s most recent textile, Red Webber, piece furthers Farajiani’s interest building connections. For this piece, Farajiani travelled to Yazd, a city famous for its ikat textiles, to collaborate with master weavers to create a curtain of a much more ambitious technical level. The piece consists of images woven into pieces of ikat that build up to reveal a spider shape appearing to hide within the threads. And for one to understand what Farajiani may wish to convey with such an image, they must first consider the cultural significance of the material with which it is made.

Ikat, known as darayi in Iran, is a near-ancient method of coloring wool and silk to create fabrics widely recognizable for their vivid and distinctive patterns by resist-dyeing either the warp or weft of the final product. In simple terms, the technique may be thought of as a highly intricate form of tie-dying, used to build imagery with often with significant regional meaning. Some scholars liken ikat to a sort of Jazz whereby standard chords, elemental to the craft, are embellished with regional improvisation to produce varieties of the fabric for which certain areas become famous—one such place being Yazd. And as with most crafts, the spontaneity that put Yazd patternmaking on the map, quickly rigidified into local custom, making the city’s master weavers reluctant to introduce new patterns into their work.

For Red Webber, Farajiani pushes an interest she pursues in Tattered Masterpieces, namely the introduction of new possibilities into traditional ikat patterns through deformation. In Tattered Masterpieces, for example, photographs document the distortions in the fabrics’ original design by the infestation of insects and other natural forces thereby introducing new formal possibilities into a celebrated artform. Whether it be figurative in the sense of insect damage or literal in the action of working with weavers to invent new patterns, Behind the Curtain calls attention to the vanity and futility of confining the present for the sake of the past. While each work invokes deformation as a conceptual concern in one of two ways, a third aspect of the term should be held in mind when attending to the work on exhibit, namely the gender politics that govern the site of production.

Contemplation of Farajiani’s work must also reflect on the power dynamics attendant to not only an outsider but also a woman entering the male-dominated spaces of Yazd’s ikat factories. To intervene into the local customs of a site is not only to influence tradition but also to inhabit the web of social relations that invisibly scaffold it. This last aspect of Red Webber is what most forcefully links it to the cultural function of the curtain in Iran. The entomological imagery raised by Behind the Curtain is suggestive of an attempt to infest this hidden scaffolding and thereby subject it to its own kind of deformation.

Negar Farajiani (b. 1977, Yazd, Iran) is a painter, graphic designer and curator. Through her art, Farajiani plays with the concept of space, both private and public. Increasingly, Farajiani's work has focused on cooperation with other artists and participatory actions. She has presented her practices domestically and internationally through exhibitions and lectures. Recent appearances and exhibitions have been hosted by Yale Macmillan Center at Yale University, New Haven, Connecticut; the Silk Road Gallery, Tehran, Iran; the Centre for Contemporary Art at Ujazdowski Castle in Warsaw, Poland; Artissima Art Fair Presented by Mariane Ibrahim Gallery; the Pasfarda Arts and Cultural Exchange in Chicago, and Cheryli and Richard Ruszat Scholarship at the University of California.