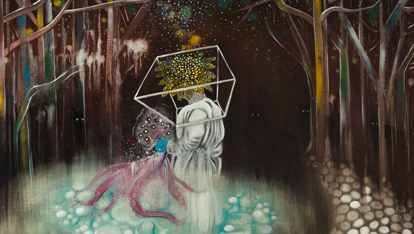 Hamzianpour & Kia is pleased to present an exhibition of new works by Elika Hedayat. Focusing on Hedayat’s intimate paintings and a new film, the exhibition shines a neon blacklight on her otherworldly realms and their constant transformation across beings and states of existence. Mutations is the Paris-based artist’s debut solo exhibition in the US.

The small, personable, dense paintings of Hedayat are windows into another world. Bewildered protagonists make up a dreamscape with recurring motifs of biological systems, rhizomatic growths, and interconnected pathways. The paintings’ internally glowing sense of light feel like projections themselves, mental images of a world past or to come, or conjured in response to the current conditions of life on Earth. The implied narrative of Hedayat’s paintings key into her video work almost as frame stills, cinematic instances which hold time expansively in their stillness. Their painted layers and material depth invite the viewer to enter their space with mind and body, into a carefully conjured realm.

Wunderkrammers, or Cabinets of Curiosities, are recalled in Hedayat’s work because of their glimpses of an other-world, fragmented snippets across media attempting to reconstruct foreign universes. In Hedayat’s exhibition subjects and protagonists reappear across the paintings and animated film in different contexts and scenarios. Bodies take a central role: human forms, trees, fruiting bodies, bodies of water, sea creatures, organisms, and particles. Despite the pictures often feeling out of balance and dystopic, these bodies find symbiotic relationships with one another, taking on mutually beneficial roles which are both self-serving and selfless. When everything is constantly in flux and changing, giving and taking, the subject is in a continuous state of formation and dissolution. Mutation becomes the norm in Hedayat’s output, and stasis increasingly the derivation.

With all works in the exhibitions titled Mutations, Hedayat continues her interest in transformation and constant change. Individual characters are both obliterated and sharply rendered, meanwhile micro and macro scales converge, and destruction and construction flow seamlessly end to end. Value judgements are upended as a tree becomes a virus, a humanoid decomposes into fungal forms, animals collaborate with bacteria. Everything in this world is, regardless of purpose, design, or intension, for better or worst. This mutation is not very soft or kind to see, but it disturbs softly, necessarily.

The correlations from Hedayat’s world to our own are not direct and better understood when felt through the dark atmosphere her paintings inhabit. Bodies, ideologies, and politics similarly experience their own mutations and transitions, intentionally and consequently. Chaotic yet settled, her paintings recall the moralistically minded work of Flemish painters Hieronymus Bosch and Pieter Breughel the Elder. While now based in Paris, Hedayat grew up in Tehran, which formed a bedrock of cultural imagination out of which she works. From painted scenes on café walls to ancient mythological cosmologies, her work is deeply rooted in a shared Iranian heritage. Yet they hold just as much in common with the Flemish painters, or Carravagio’s sense of light, or science fiction illustrators. After drilling down, past the decades and centuries of cultural production, human desire to change the world is a groundwater which has been drawn from for eternity, a body into which utopia and dystopia flow, chaos and calm, agency and helplessness. With this exhibition Hedayat opens a dreamlike window into other realms of being regardless of whether we like it or not.

The gallery is open Tuesday through Saturday, 11am to 6pm.