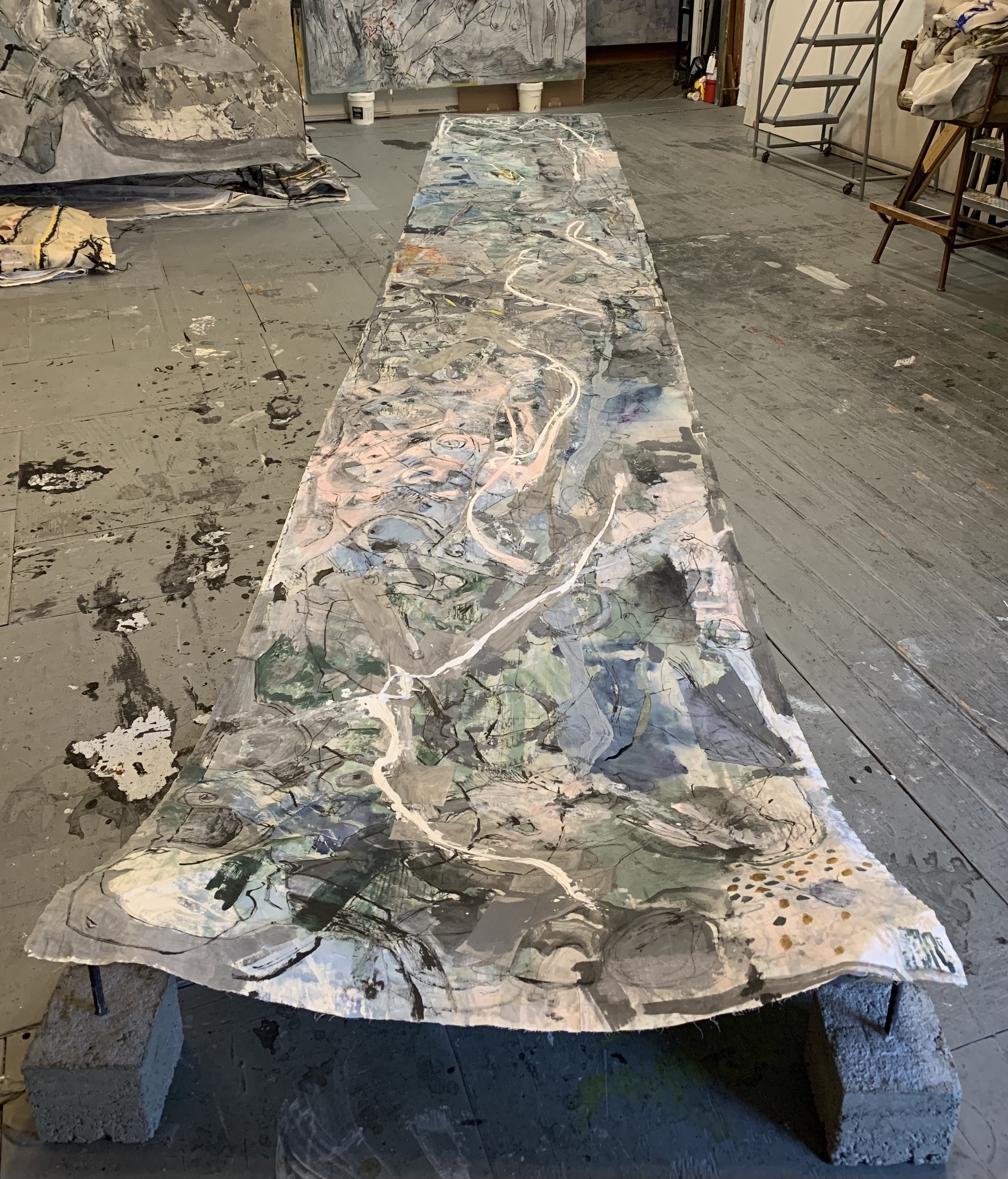 “Knot” denotes a cluster of persons or things, a group, a protuberant lump or swelling in tissue.

Iva Gueorguieva’s 25 ft. tapestry suspended on concrete and rebar runs the length of the gallery space splitting it in two, evoking the silhouette of a long dinner table; although the loose tapestry lacks rigidity, and a wine glass would instantly tip over and spill its nurturing contents. Gueorguieva has invited four artists: Elena Dorfman, John Emison, Josephine Wister Faure and Georgina Reskala to gather around this improbable table.

The work of this group of artists is intensely focused on physical manipulation and the disruption of surface. Through the act of interruption, the visual experience opens to the haptic, the historical and the metaphysical realms. Dorfman and Reskala crumple, prick and interfere with the photographic surface in various ways, each seeking, through intervention in materiality, evidences, echoes, whispers and glitches that marry the past with the present. Emison uses letter carving techniques to incise images in the flesh of found rocks, which are already sculpted and rounded by rivers and wind. Wister Faure pierces a wall with eyes that weep. Gueorguieva attempts to knot multiple iterations by which to visualize incomprehensible time, loss and memory. In each artist’s work, an oscillation of meaning is inherent, as are the ephemeral, the receding and the unwitnessable. The collective artworks offer suggestions through method, proximity, juxtapositions, reversals and repetitions.

Elena Dorfman crumples, nails, tears, punctures and physically alters the paper as a means to decorate, distort, or decimate. Looping continuously through analog and digital processes, Dorfman’s crumpled original objects are also preserved, though their state of precarity is visible. The evidence of destruction is in our hands but who, ultimately, is responsible?

John Emison painstakingly adds information. Self-taught, he carves into the surface of found boulders in order to contemplate life and death. Evoking round bellies, the surfaces he engraves seems to heave and breathe. The carefully incised and painted strips of geometric patterns are reminiscent of body piercings and flesh markings.

Josephine Wister Faure made Weeping Wall in 2015, in response to the terrorist shootings in her native Paris. The wall sheds tears that trickle silently down, a surrogate portrait, an impotent witness. Despite the artifice the rhythm of the holes’ insistent production is potent enough, a contradiction able both to condemn and to incite empathy.

Georgina Reskala conceals and reveals information by reducing legibility in the printing process through multiple impressions, mimicking the act of remembering and forgetting. Crumpling the paper prior to exposure further deforms the terrain. When Reskala prints on linen and unthreads, she re-enacts the way history gets passed on (adding, omitting), mixing absence for presences.

We have scheduled several performances during the 7-week course of the exhibition, providing further opportunities for shifts in focus, attention, and interpretation. With each happening the atmosphere will inevitably change, affecting the ambient qualities of the space, engendering varied and revived experiences around the works assembled in the exhibition.

A durational performance by Alison D’Amato in collaboration with John Emison
https://imaginedtheatres.com/the-sacred-something/

Net that Caught a Man

A performance by Barry Del Sherman and Jennifer Stefanisko